Volvo says Twilight’s Edward Cullen is their ideal vehicle owner. Think about that for a second.

We’ve got another Burst of News coming your way early next week, but this is something we just felt we couldn’t keep bottled up all weekend.

According to Volvo, angsty douchebag vampire Edward Cullen, of Stephanie Meyer’s stupefyingly poorly written best-selling Twilight series, is the ideal Volvo owner. As such, in the upcoming future Razzie-nominated blockbuster adaptation of New Moon, Edward (bet he hates it when you call him Eddie) will be driving a Volvo XC60 sport-utility vehicle.

Yes, folks, you read that right. A passive-aggressive, pasty, teenage bloodsucker is the exact sort of person Volvo cars wants to be identified with.

With hair like that, you'd think he drove a convertible.

A vampire who’s not only so pathetic and filled with self-loathing that he refuses to consume human blood, but jerks around the girl who’s in love with him, breaking her heart and refusing to let either of them be happy. (Dude, if she wants to be a vampire, let her be a vampire! Especially since “being a vampire” is no different than “being Clark Kent on Smallville,” except your skin sparkles.)

A vapid, two-dimensional creation from the masturbatory fantasies of a middle-aged Mormon mother who never so much as wrote a short story before drafting a cliched, anti-feminist, conservative piece of  drivel that, despite demonstrating the same level of writing skill as slightly-better-than-average Supernatural fan fiction, became a series of novels that spent almost two whole years atop the New York Times bestseller list, causing far superior writers who have been questing quixotically for years for a mere modimicum of her success to debate whether the Colt .45 they reach for should be in malt liquor or firearm form.

Volvo claims Eddie identifies well with their vehicles because he is “a nurturer” and cares about keeping the people he loves safe, while still seeking something good-looking. (After all, he is not-banging Kristen Stewart.) I say, emasculated bipolar monster , nurturer – po-tay-to, po-tot-o.

Man, first they're associated with sushi-eating lefties, then "vegetarian" vampires. When will Volvo find owners who like red meat?

You know who would make a great character for Volvo to hook their wagon to? Thor. Incredibly powerful, well-spoken, flowing hair, an enormous hammer capable of bringing down lightening or splitting through dimensions – and he’s Norwegian to boot. You think Eddie Cullen has as much Swedish heritage in his corrupted veins as The Mighty Thor does?

(And don’t give me that “Edward’s pale enough to be Swedish” shit, cause I ain’t buying it. He’s a vampire. If he was one bit Norwegian, he’d be living up there from October to March. I read 30 Days Of Night. I know how vampires think.)

There’s a Thor movie headed for theaters in 2011. Maybe Saab will be smart enough to snap up the sponsorship rights to that one. I can see it now: “My evil half-brother Loki has stolen Mjolnir, robbing me of my ability to fly! Quick – into that Saab 9-5! We might not catch him – but with a turbocharged engine, we’ve got half a chance!” 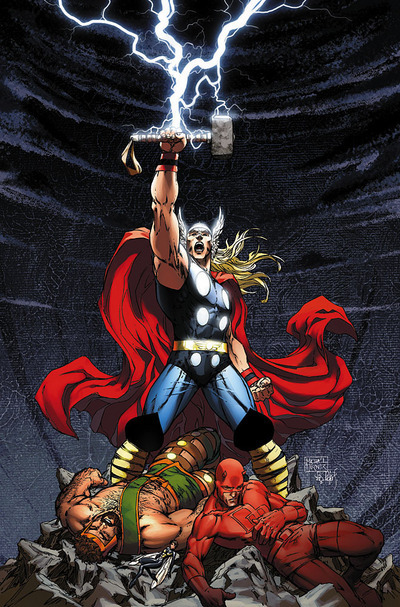 Here's a much better character to associate your brand with - someone who beats blind men and cross-dressers to death with a hammer!

And on a completely unrelated note, here’s a quick video of a man in Texas driving his Bugatti Veyron into a lake. He claims he was startled by a “low-flying pelican.” Personally, I think he just heard Volvo wants to be identified with Twilight.